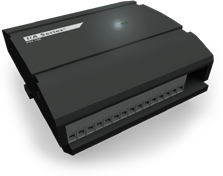 Modern Systems Management Ltd. was incorporated in 1978 to serve as an independent field office for Barber-Colman, and we have represented that same factory and its successors to this day.

Howard D. Colman was an inventor who began his career in the textile industry. Aided by a $100.00 loan from W.A. Barber he invented a hand knotter for textile mill spool operators. By 1901 they were being turned out at the rate of 500 per month in the Rockford factory which was founded a year earlier. One hundred years later, eighty-five per cent of all cotton weaving mills in the United States have installations of Barber-Colman machinery. Over the past century Barber-Colman entered into such diverse fields of manufacturing as products for automobiles, aviation, machine tool, temperature control, plastic molding and industrial instrumentation.

In 1978, when Modern Systems became a Barber-Colman factory field office, the commercial controls industry recognized Barber-Colman as being one of the "Big 5". At that time the world's largest temperature controls manufacturers were Honeywell, Johnsons, Powers, Barber-Colman and Robertshaw. Since that time HCL and JCL have remained intact while Powers became Siemens and Barber-Colman merged with Robertshaw.

From Siebe to Invensys

In 1986 Britain's Siebe Plc purchased Robertshaw and the following year purchased two more U.S. companies, Ranco and Barber-Colman. The Ranco and Barber-Colman acquisitions pushed Siebe's turnover past the £1 billion mark in 1988. Another significant acquisition came in 1992, with the purchase of the Foxboro Company, a world leading process controls automation company. Between 1992 and 1996 Siebe would conclude an impressive number of acquisitions, nearing £2.6 billion in revenues.

Invensys Building Systems, formerly Siebe Environmental Controls, manufactured temperature control products and intelligent automation systems for commercial, industrial, and institutional buildings in North America and around the world. With over 200 years of Barber-Colman Environmental Controls and Robertshaw Control Systems expertise, Invensys Building Systems was a leader in the HVAC industry and carried one of the largest selections of building controls in the world. These products were marketed by a global group of over 500 sales offices to ensure worldwide availability.

At the end of the day, we have represented the same factory for the past four decades.